My current research in blazar micro-variability is conducted under Dr. James R. Webb as part of the FIU Blazar Group. Links to both Dr. Webb's homepage and the webpage of the FIU Blazar Group are included below. While my work is theoretical, observations are conducted by the research group (which I take part in) in order to test different aspects of my work. These observations are conducted through the use of four main optical telescopes in collaboration with the Southeastern Association for Research in Astronomy (SARA): a 0.9m telescope at Kitt Peak National Observatory in Arizona, the SARA North telescope; a 1.0m telescope at Roque de los Muchachos Observatory in the Canary Islands, the SARA East telescope; a 0.6m telescope at Cerro Tololo Inter-American Observatory in Chile, the SARA South telescope; and our own 24in telescope at the observatory at FIU, the Stocker telescope.

What is a blazar?

A blazar is a subtype of galaxies known as quasars. Quasars are very interesting galaxies to study for two main reasons: they are very far away from us, and thus are extremely old (billions of years old), and they are very bright, often times tens or hundreds of thousands of times brighter than an average galaxy (such as our own). There is something very peculiar about the light emitted by quasars, though. The brightness from a typical galaxy comes from the added brightness of all the stars contained by the galaxy, and so the brightness is spread throughout the galaxy. The brightness from quasars, though, originates not from throughout the galaxy, but from a tiny point at the center, known as the nucleus. Because of this, when quasars were discovered, they were called "quasi-stellar objects" -- they seemed to be stars, because they were so small, but they were unimaginably brighter than stars ever get to be. We now know that quasars are so bright because they have a rapidly rotating, supermassive black hole at their center, which powers something known as a relativistic jet. This jet, which leaves the nucleus of the galaxy in a roughly straight line, emits the brightness that we see. How do blazars fit into all of this? A blazar is simply a quasar with its jet pointed directly at us.

One of the most common examples given of a blazar is the galaxy M87, shown to the right (image credit: NASA's Hubble Space Telescope). M87 is unique in that it has a relativistic jet that is very bright in visible light. Notice the thin blue stream emanating from the center of the galaxy; that's the relativistic jet.

What exactly is a jet?

A jet (or a relitivistic jet) is a very hot plasma emitted at extreme velocities from the nuclei of quasars. As I said above, a blazar is distinct because its jet will point directly at us. The jet, like any other plasma, is a fluid of electrically charged particles confined by some magnetic field. This magnetic field is the reason the jet moves outward in a relatively thin stream. A fundamental fact of nature, though, is that any time charged particles like electrons interact with magnetic fields, they're going to emit radiation in the form of light. For non-relativistic particles, this light is known as cyclotron radiation, and for relativistic particles, it's known as synchrotron radiation. 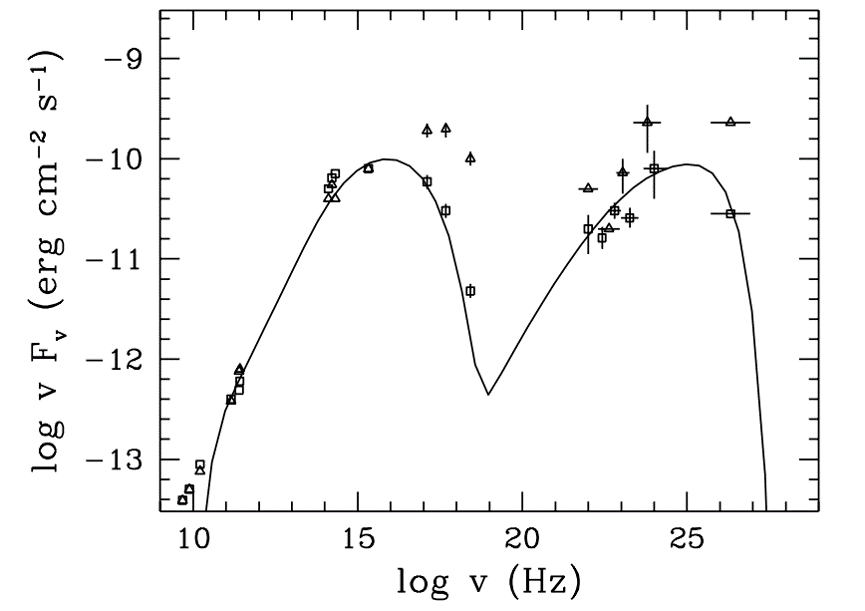 Something else distinct about blazars is the composition of the light. The light comes in all types, from radio waves, microwaves, up to x rays and gamma rays, and it has a distinct double-peaked shape. This double peak feature is shown to the right, with the vertical axis representing brightness and the horizontal axis representing frequency (image credit: A. Mastichiadis, J.G. Kirk, Astron. Astrophys. 320, 19-25 (1997)). The first peak of a blazar's emission spectrum is caused by the synchrotron radiation I introduced above, but the second peak is not. The second peak is actually caused by a quantum phenomenon known as inverse Compton scattering. Basically, what happens is light traveling through the plasma, as individual photons, collides with electrons in the plasma like two balls colliding. In the collision, the highly energetic electrons give some of their energy to the photons, which causing their frequency to rise. This is what allows light to be emitted by the jet all the way into the gamma ray part of the spectrum, which is not commonly seen in the universe. Notice that the shape of the second peak roughly matches the shape of the first peak. Because of this, many researchers think that the photons undergoing Compton scattering are the photons emitted as synchrotron radiation by the jet itself, so as the synchrotron radiation gets brighter, the Compton radiation gets brighter (i.e. the two peaks correlate). This is known as a synchrotron-self Compton emission.

Electromagnetic theory says, as far as our current understanding goes, that the brightness of the light emitted by the jet should be constant over short time scales. The brightness depends on how dense the plasma is, on how strong the magnetic field is, on the direction that the jet points (due to a relativistic effect known as Doppler boosting), and other properties. All of these properties are known to vary slowly in time (think years and decades). However, when we take short-term observations of blazars, over a night let's say, we can see very rapid, low-amplitude oscillations in the brightness. These oscillations wouldn't be seen if you were following the long term trend of the brightness because they average out to zero. These oscillations we refer to as micro-variations, and the phenomenon in general we refer to as micro-variability.

Why do we care?

Black holes are of fundamental importance to General Relativity, one of the core fields of physics. Due to their nautre, black holes must be observed indirectly. As I mentioned above, it is already well-accepted that super-massive, rapidly rotating black holes power the jets emitted by quasars. The big question is: "How do black holes power these jets?" Black holes "suck" matter into them, so how are they emitting energy? The widely accepted theory today is via a mechanism called the Blandford-Znajek process. Once this energy is available to power the jet, how are the particles in the jet actually accelerated, in order to have the energies required to cool via synchrotron radiation, producing the light that we observe? If we can gain enough insight into the synchrotron emission process, it could lead us to the particle acceleration process, and knowing the particle acceleration proccess could lead us to a better understanding of how a black hole emits energy, which is a fundamental question in General Relativity. So while this may seem far-removed from something so fundamental, it is definitely an important step along the chain towards understanding these mysterious objects in the universe. 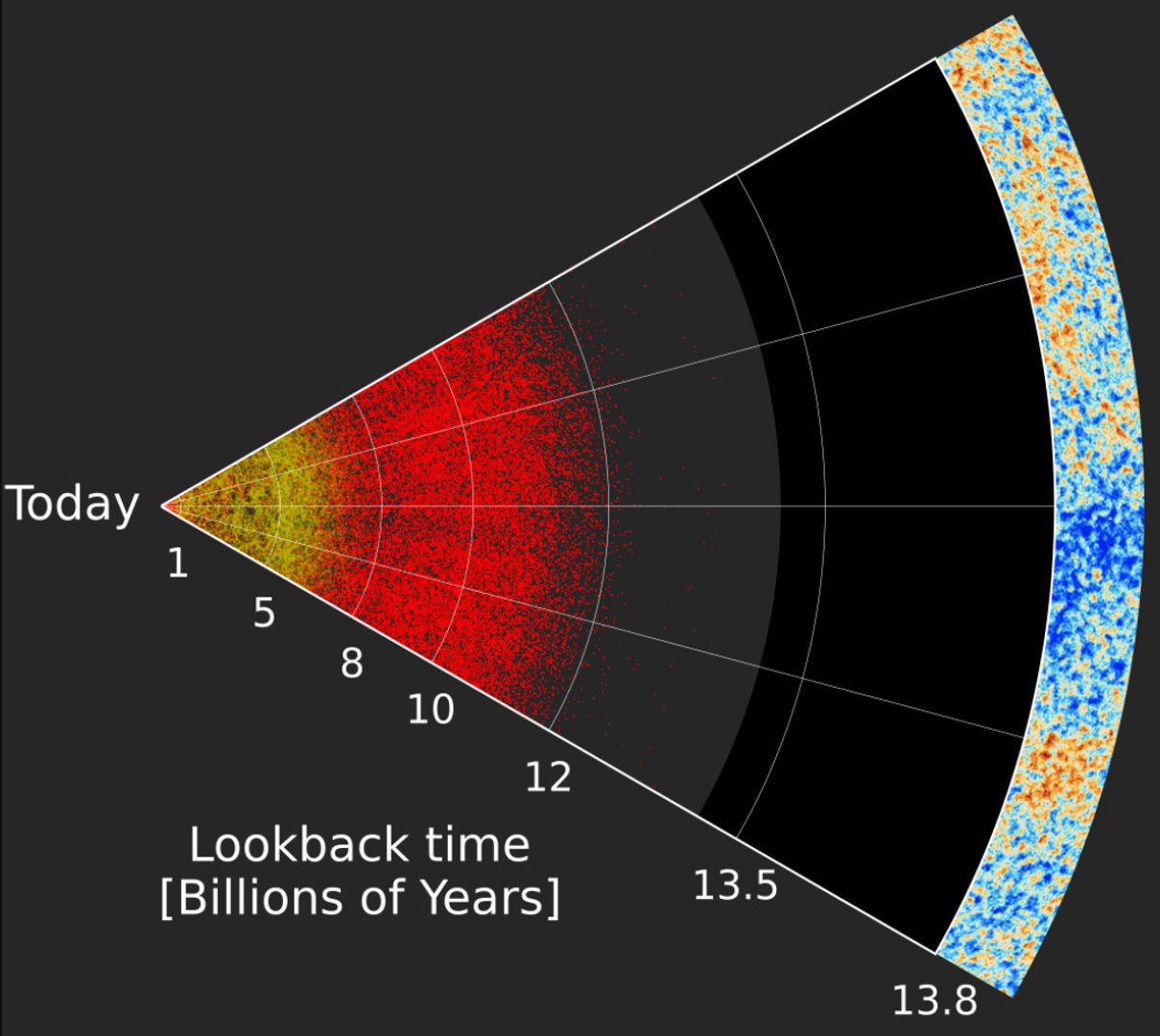 In general, quasars are also of fundamental importance in the study of cosmology. As they are extremely distant objects, they give us a glimpse way back in time, allowing us to see billions of years into the past. The fundamental tenet of cosmology, known as the cosmological principle, states (in part) that the mass in the universe is homogeneously spread throughout space. This means that, at any time, if you took a picture of space, the density of the universe should be roughly constant. But this doesn't appear to be true at first glance, right? If we look at our solar system, we have basically all of the mass located at the center, where the Sun is. Even if the planets were comparable to the mass of the Sun (the sun is 100-1000 times more massive than the planets), we'd have the Sun, then a whole lot of nothing, then a planet, then more nothing, then another planet, then more nothing, etc. So the solar system doesn't appear to be homogeneous. The same goes for the Milky Way: it's mostly empty space, with a solar system here and there. Looking beyond our galaxy, to our galactic neighborhood, galaxies are spread out with vast distances of nothing-ness between them. For instance, our galaxy is about 100,000 lightyears across, while Andromeda (the nearest galaxy) is about 2.5 million lightyears away -- there's a whole lot of nothing between us an Andromeda.

So, is the cosmological principle satisfied? Does the universe ever appear to be homogeneous? Yes, it does, actually, but only at distance scales known as cosmological distances: roughly 100 million lightyears or greater. Then, it turns out, mass is pretty evenly spread throughout the universe. This is best seen by studying quasars; the image to the right is a deep quasar field taken by the Sloan Digital Sky Survey in 2016. The yellow and red dots represent different quasars observed; the radial distance from the origin, labeled "Lookback time," represents how far away from us they are. What's particularly great about this result is that the cosmological principle was assumed back in the early 1920's, and solutions to Einstein's field equation, known as Friedmann cosmologies, were based on it. From the study of these Friedmann cosmologies, we were able to explain a great number of observed phenomena in the universe, even though we weren't certain that the universe was homogeneous, and in fact it appeared not to be. For more on Friedmann cosmologies, see my notes on them.

Currently, the FIU Blazar Group has a functioning model for microvariability, which we call the KRM jet model (named after the researchers John G. Kirk, Frank M. Rieger, and Apostolos Mastichiadis, who published a paper in 1998 that inspired our model). The KRM jet model is what is known as a "two-zone, shock-in-jet" model of particle acceleration, on top of which we add relativistic turbulence in the jet to produce the effects of microvariability in the synchrotron emission. Turbulence as the producing factor of microvariability has a lot of promise. First, microvariability is known to not always occur (in some blazars, microvariability occurs in over 90% of observations, but never 100%). This is easily explained as a jet changing between laminar flow and turbulent flow, with microvariability only appearing when the jet is turbulent. Second, microvariability has no correlation with brightness. If explainable by turbulence, the presence or absence of turbulence would have nothing to do with the overall brightness of the synchrotron emission. There are other reasons to believe in turbulence as a possible explanation, but I'll stop here. Suffice is to say that we in the FIU Blazar Group are excited about the prospects of the KRM jet model, and are looking forward to further tests of its validity!